Be Weary the Tooth Fairy

The Tooth Fairy is an example of folklore mythology sometimes presented to children as fact; other prominent examples are Santa Claus (who originates from Saint Nicholas) and the Easter Bunny. The realization or discovery that others may act on behalf of the tooth fairy is considered a part of growing up. Some adults remember clearly for their whole lives when and how they discovered the truth about the tooth fairy.-Wiki


This statement above in and of itself is a definition of a Star Gate. It is a realization for the child and a memory that it shall never forget. In short an ego breaker. I see the ego as a representation of the belief system that one is engaged with. The world view you may have is one that fairies exists... Your belief system changes when you understand the world of imagination and reality have a partition between them.


Some believe that other useful purposes include giving children a sense of faith in things unseen, believing in the incorporeal, and giving them a little mystery to solve, helping them understand the difference between the real and the imaginary. It is believed children gain some maturity as they solve the mystery of the source of the money or gift. According to popular folklore, teeth will be exchanged for presents on any day of the year except Christmas.-Also Wiki

Riddles are a relative of puns. The whole purpose is that when you tell someone that this is god, this is reality. The have 2 choices, they can believe you or NOt. If you introduce them to the new idea in the form of a multi leveled pun, symbol, or riddle.... They NOw have to figure something out before they believe you or not. Think about HaRRy Potter and Dumbledore.

The primary useful purpose of the tooth-fairy myth is probably to give children a small reward and something to look forward to when they lose a tooth, a process which they might otherwise find worrisome. It also gives children a reason to give up a part of themselves that they may have grown attached to. -Further Wiki

Dreams are important to me. Carl Jung and his beliefs of the Dream and the Universal context on our relationship with symbols needs to be mentioned here. I think that dreams are the best way to talk to the true you. The Dream Dictionaries(or at least the majority of them) proclaim that losing ones tooth or teeth in a dream is a sign of fear of not having enough money. So not only is the realization that the tooth fairy is not real a personal stargate of sorts, but the tradition is a ritual in us realizing the material worth of our own body..... Physical body=Couple of Quarters. This has a great deal to do in my opinion with the on going sync winks involving candy and other junk food..... These are a material indulgences that decay the body, or speed up death. Look at how each of the Holidays that fit into the fantasy character's grouped with the Toothfairy(Easter, Christmas) have lots of sweets involved. 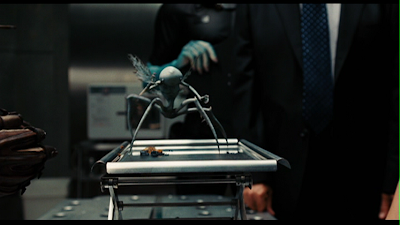 The little Tooth Fairies in HeLLBoy 2 are devilish calcium eaters. The fear attachment of having your bones eaten and pooped out is a double 1.5 meaning. First is the irony(this much is obvious) of having the normal consensus of the Tooth Fairy challenged and instead them being seen as a evil devourer. The second is the connotation of self or ego being destroyed by something..... We can free associate this with the destruction of the material body and money problems. Hollywood perhaps getting desperate has pulled this theme a lot lately... Regardless there is a psychosis here that need be looked at. 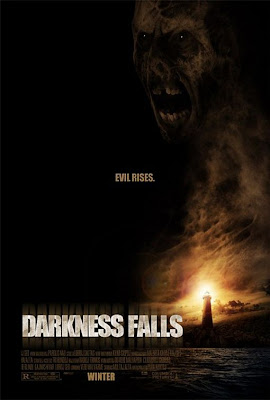 Tooth Fairy attaches in Darkness Falls 2003. But this was actually inspired by a little kids movie simply called Tooth Fairy that came out in 2001. Again there is more that comes in 2004 called also the Tooth Fairy(not shown). 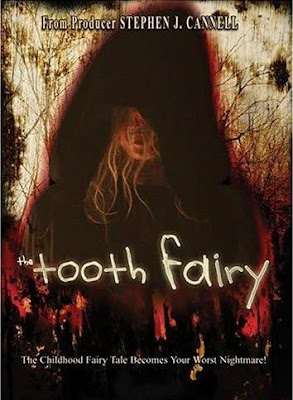 Then 2006's straight to video Tooth Fairy(above). This dealing with an old lady who kills children for their teeth.


Most of the flicks mentioned(although I won't watch them so I'm not sure) deal with either the murderous Tooth Fairy or the discomfort of withholding the myth from the child. However there is another pop reference that has never made true sense to me.... Which is to say I did not really think it was funny and it only makes sense if the context changes. 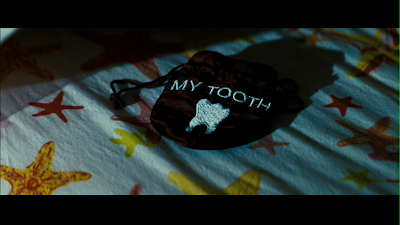 Notice that this scene in Transformers features the Tooth Bag on the bed of stars.....

"It's Full of Stars" 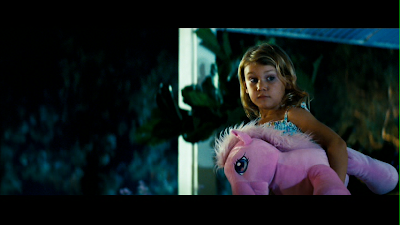 The child ask if the Transformer is the Tooth Fairy(and no... That is not an unicorn... Sorry). The follow up to this of course would be the Dwayne Johnson film entitled Tooth Fairy. That due out latter this year. Seeing that Dwayne Johnson's sycn web keeps getting thicker and gaining momentum this should be a treat(pun intended).

My interpretation of this short little blip I wanted to share with you is that the theme of recognizing fact from fiction is coming up more and more regularly in cinema recently. Think Spiderwick, Hellboy, and of the like. This is a almost blatant parallel to the metamorphosis that many will be experiencing and/or are experiencing in real time NOw. Reality is merging with the fantastic and perceptions are rearranging across the board ranging from the mystical to the everyday mundane. This is reflected in pop culture through necessity alone. 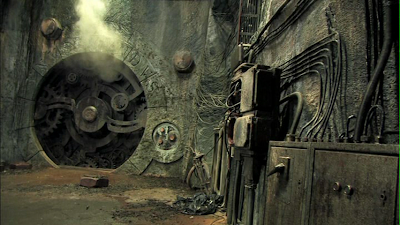 Above the Troll Market(HeLLboy2) entrance is the Latin phrase Unus Mundus. Paracelsus the Alchemist termed this phrase for the meaning of transfiguration. Basically saying that Gold could be made from any metal because the two metals spawned from the same source and were therefore basically interchangeable. Hence "One World" or "Unus Mundi".

Carl Jung came along and tagged the phrase with Archetype and Sychronicity. Saying that what we actually study here at this blog is a product of the observer and observed being one and the same.... Oddly enough you'll hear no argument from me. 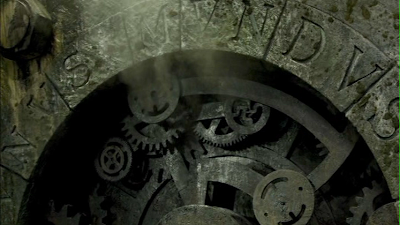 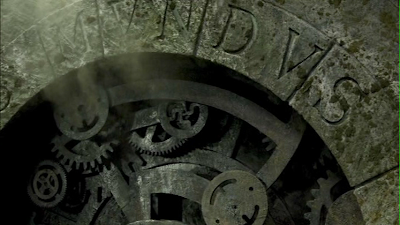 The makers of HeLLboys have purposely given us something to ponder.... The land of Fantasy is marked with the hint of our own interpretation.

Love and Thanks
Posted by A Few Shots to Shaman at 12:11 AM

inspiring stuff! weeks ago I got really into teeth after reading about these people who recommend not dealing with cavities as to attain perfect health (as all fillings will destroy the natural energy balance etc). Then I saw Willie Wanker/Wonka have a Christ-offer-Lee-saturn- dentist father. Incl hvaing his house removed (void space) which banged on the synchro-drum and my Berlin experience (read my wacky post on firegates). Interesting to read your take on Jung, keep that thing Xpanding brother. got into the idea also of disecting the phenomena of sync, to gain understanding when reading about bird flock readings in pagan times!

I had a dream the other night where I had a roommate that insulted my wife..I can't remember what he said but...I killed him. I stabbed him 3 times in the chest on his right side. There was no blood and I used a metal punch tool... Really fucked me up..
The reason I mention this is...

Ive had the thought for the last few years that when we dream we are traveling parallel existences. When we wake up we're transported 'home'. But the thought that a thought is a reality really throws a wrench in there...

wv in blue as always 'chaceig'

Appropriate timing as usual Mr. Murugan. I've been preparing my next post which is focusing on the Trident, and just before reading your new post I learn on Wiki that the Trident means Tri (three) dentes (teeth). The posts nearly completed and considering the relevance of the Tooth Fairy I now feel some 'Teeth' syncs might be appropriate.
Thank you for the inspiration!

Indeed. We are all the all... those tooth fairies in Hellboy 2 always stuck out to me. Any thoughts on the significance of faeries in general? Peter Pan, Pan's Labyrinth, those wierd swarming things from Narnia...

Great stuff as always: I'll be looking out for those tooth-fairytale-synchs now.


Double A... My dreams are like an alternate life I can't remember right now... I suppose many are experiencing this weirdness... I would interpret your dream as you loving your wife, but that's just me. Number 3 is important. Much love brother.

Your welcome for the inspiration and I thank you for yours as usaul Mr. Arrowhead(that one was intentional!)

I know this is a common opinion but...

Mrs Clause = The Scarlet whore of Babylon.(think about her red dress and Religious ambiance)

One example is Fred Clause where the north pole is crowned with a giant hexagonal dome.

Thanks Satan for delivering material possessions through out the NWO now.

Hellboy 2 shows us the true raw roots of these collective thoughts with those evil fucking things eating teeth.

Devil liveD lives and lived along time ago...

I'm sorry if this makes no sense

Reminds me of that scene in Fight Club, where Edward Norton loses a tooth and Brad Pitt says, "Hey, even the Mona Lisa is falling apart."

In the Unis Mundi archway, the keystone appears to be the VN/UN or United Nations = unis mundi/One World (government). One of the cogs has a swastika shape similar the one found in a room in the Nazi-SS ritual castle.

I think Tri-Dent gum just realsed some gum that's supposed to 'build health teeth' or whatever.

I was thinking about toothfairies recently as "Thoth-fairies" though not normally as violent as the fairies in those movies... he is asociated with the baboon which is a pretty violent ape, though it is pretty frightened by Damion the Anti-Christ in The Omen. Maybe they were afraid of Damion's trident "devil's pitchfork"? :D Hmm, also the Baboon is the pet of a powerful evil magician who wants to destroy the world in Lord of Illusions. Anyways I'm not even sure what I'm talking about so I'll be going now. Have a nice day :D

I don't know if this goes to your gmail. But the laptop overheated.

If this goes through next . . . wait a minute, then I'll be the ninth comment in this thread, nine being the number of completion, and my wv is bewer, a direct reflection on the title of this article.

I'd like to direct your attention to ace essayist Erin 'ElfBlade' Lindsay's amazingly well researched site, Cyber Alfheim, which I list as "my" web page, which it izzint, it's my "Kinder" web page, my kind, my children, on my blogosphere profile nonpage page.

Like our Prince Nuada in Hellboy II: The Golden Army, a self-adeclared Prince of the Dragon Court, Nicholas de Vere him(s)elf is quite the elven supremacist.

De Vere's now Borders Books & Barnes & Noble orderable "The Dragon Legacy: The Secret History of an Ancient Bloodline" (whose interview with Tracy R Twyman in PARANOIA magazine is readable here as well), asserts to be all about the real elves, purporting that only those of the Starry Race can work 'real' magic. It is still available in a slightly earlier form as From Transylvania to Tunbridge Wells. I have to admit that I wholeheartedly disagree with him. Anyone, human or elf alike, who accelerates them(s)elves, can work wonders & achieve greatness.